Hope When You Are Hurting

Hope in a Troubled World 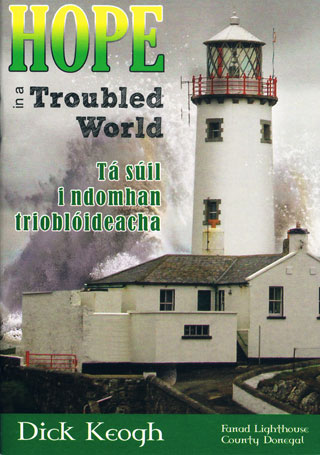 In this troubled world we all face storms – storms in the natural world and storms in our daily lives. However, even in troubled circumstances there is hope, for Jesus came – Jesus our Comforter, Saviour, Redeemer and Friend.

Are you fearful?
Do you feel worried?
Does anyone really care?

Now read on to find out some good news.

From early December 2013 through to March 2014 Ireland was battered by a succession of violent storms, resulting in widespread devastation. Storms Christine, Ruth and Darwin left a trail of destruction in their wake.

As high winds swept through the country felling thousands of trees, blocking roads and tearing roofs from buildings, people were fearful and troubled. Structural damage to homes and businesses was widespread. Power lines, telegraph poles and transformers were torn down by the violent winds. At one stage 260 000 homes were without electricity. The transport network was seriously affected, with some airports being forced to close temporarily. The rail network came to a standstill and a number of trucks overturned on the country’s main roads, including the motorway. Torrential rains caused several of Ireland’s rivers to burst their banks. High tides resulted in severe flooding in a number of coastal cities and towns.

In some areas, families had to be evacuated after their homes flooded. An estimated 100 000 households were left without safe drinking water. Schools and businesses were forced to close because of a lack of clean water and electricity supplies. The farming and agricultural communities were among those particularly devastated, as thousands of acres of farmland were flooded. Many farmers had to watch helplessly as their fields, one by one, were totally submerged.

The fishing industry was also badly affected by the storms. Mountainous waves prevented fishing fleets from putting to sea. Other boats were caught in the storm and struggled to stay afloat in massive swells of up to twenty feet. The RNLI rescued four fish farmers who were in trouble off the coast of Clifden, County Galway.

These storms highlight the dangers farmers, fishermen and all of us face as we battle with the elements. Some storms are forecast and anticipated, while others can arrive suddenly. Many can be devastating and remind us of the precarious world in which we live. However, there is hope, for Jesus came to comfort us in times of trouble.