Hope When You Are Hurting 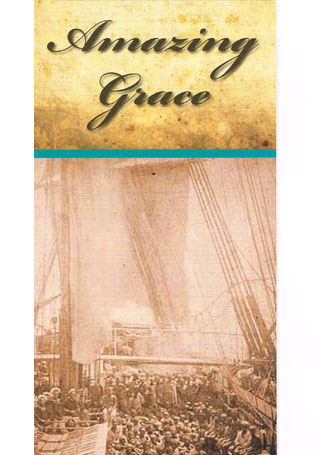 An Amazing Man
John Newton, the man who wrote the hymn entitled ‘Amazing Grace’, was very glad to set foot on the Inishowen Peninsula after his badly-damaged ship anchored in Lough Swilly in the aftermath of a fierce storm. This amazing man was born on 24 July 1725. His mother died just before his seventh birthday. His father was the captain of a merchant ship sailing the Mediterranean. John left school when he was ten years old. At the age of eleven he went to sea with his father and accompanied him on several voyages. John was press-ganged into the Navy where he served as a midshipman. He later deserted but was apprehended, publicly flogged and then demoted from his position. Before he reached the age of twenty he became an apprentice to a slave-trader and was based on some of the islands near Sierra Leone.

At one stage he was no more than a slave himself. During this time he was mistreated and became seriously ill. His bed was a board and his pillow a wooden log. He lived on scraps of food and was so ill he was expected to die. Miraculously he recovered and was later rescued by the captain of a ship. They set sail for England in January of 1748. Their ship was in need of repair and was in no condition to withstand any great storms they might encounter during their 7,000 mile journey.

An Amazing Storm
One night John was roused from sleep by a violent storm which engulfed the ship and almost wrecked it. The crew manned the pumps against the incoming sea. They used their bedding and even their own clothes to repair the leaks, nailing old boards over them. The ship had a gaping hole in its side and would have gone down but for the fact that the cargo of beeswax and wood was light. Most of their provisions, livestock and water were lost, so for the rest of the voyage they survived on scanty rations. Gale force winds drove them out of the shipping lanes, so there was little possibility of them being rescued by another vessel. Just when all hope of rescue was lost the wind came round to their advantage. It brought them within sight of Tory Island. The following day (8 April) they anchored in Lough Swilly. It was four weeks from the day of the great storm. Shortly after dropping anchor the wind became so violent that John was convinced they would have been shipwrecked and lost if they had been caught in it.